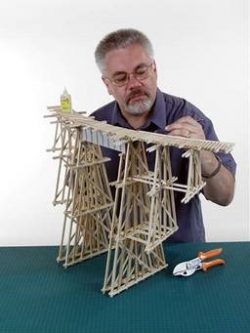 Tom Piccirillo started building scale models at age 12 after discovering a copy of the April 1964 issue of Model Railroader magazine for sale at a local corner store. After receiving his degree in mechanical engineering in 1974, he pursued a management career in well-known industries, such as Burroughs Corporation and Ohaus Scale, and holds patents on electronic connectors. His most-recent tenure was president of Micro-Mark where, for 24 years, he developed and marketed ingenious tools for builders of scale models.

Tom is a prolific author and has written many how-to articles for the hobby press, including Model Railroader, Railroad Model Craftsman, The NG&SL Gazette, Fine Scale Modeler, Dollhouse Miniatures, and Great Model Railroads. In 2009, Tom earned his Master Model Railroader certification, and has been awarded the Paul Mallery Trophy for model building excellence. Currently a member of the Hobby Manufacturers Association, Tom consults for major USA and international producers of tool and hobby products, providing editorial and photographic services in addition to Marketing Analytics.

He is perhaps best-known for the construction and operation of the O scale Somerset County Traction System, which he has described not only in magazines, but also on Public Television. Tom is also former-president of The New Jersey Live Steamers, where he operates his home-workshop-built 1/12th scale locomotives and cars. He is restoring an antique Mercedes-Benz automobile, and is an accomplished jazz rhythm guitarist.

Xuron® model railroad wiring tools are designed for the hobbyist, whether you’re a seasoned veteran or just starting out. From wire stripper to pliers, flush cutters and track cutters, Xuron Corp. offers what you need to make your layout look great and be fully functional. 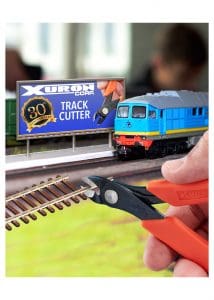 Updated May 31, 2022 This article was originally published on our Blog in September of 2017. We are rebroadcasting it because the content is still very relevant and 2022 represents the 33rd anniversary of our introduction of the Model 2175B Track Cutter to the model hobby market. Thank you for 33 years of support and […]

Tom’s Corner Tips, techniques and commentary from Master Model Railroader Tom Piccirillo Model builders have never before enjoyed such a diverse assortment of materials for  duplicating full-size materials in miniature. The scale modeler can now obtain corrugated metal, honeycomb sheet and etched materials in the precise sizes and contours needed for model construction, but using […] 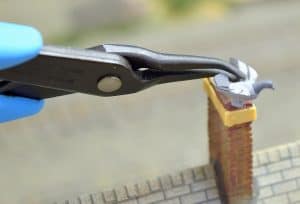 How To Add Details To A Model Railroad Or Diorama

Tom’s Corner Tips, techniques and commentary from Master Model Railroader Tom Piccirillo Some people say, “It’s all in the details.” This is certainly true for award-winning scale models. Models are submitted for judging at contests, and much of the “score” needed to win an award is derived by the clean installation and proper placement of […]

Tom’s Corner Tips, techniques and commentary from Master Model Railroader Tom Piccirillo One of my favorite hobby activities is rebuilding old model railroad equipment that I have acquired over the years from friends, estate sales, and flea markets. I think it’s really cool to transform what appears to be a pile of junk into a […]